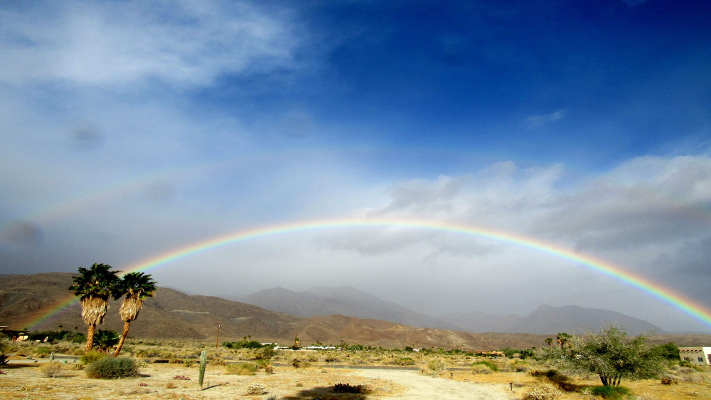 At 615,000 acres, Anza-Borrego Desert State Park is the largest state park in California and one of the largest desert protected areas in the west. Located in the eastern half of San Diego County, the park extends roughly 25 miles east to west and 50 miles north to south.

The 932 plant taxa found in the park include a number of species unusual in California, such as the elephant tree more typical of Baja California. Late winter and early spring bring spectacular wildflower blooms and throngs of visitors. 331 bird species such as greater roadrunners and golden eagles are on the park checklist. Reptiles and amphibians include over 60 different species such as chuckwallas, desert iguanas, and the red diamond rattlesnake. The 60 species of mammals range from kit foxes and mule deer to the majority of the endangered desert bighorn sheep remaining in California.

Petroglyphs, pictographs, and other archeological sites indicate that human habitation in the area began at least 6,000 years BP. In the late eighteenth century, Spanish explorers encountered settlements of Kumeyaay, Cahuilla, and other native peoples in the area. The Southern Emigrant Trail and the Butterfield Overland Mail Route, which brought many nineteenth-century migrants to the West, pass through the park. The park’s Begole Archeological Research Center houses maps and historical artifacts from all of these periods and is located near the reserve headquarters.

Reserve buildings also houses an office for the Anza Borrego Foundation, the nonprofit cooperating organization for Anza Borrego Desert State Park. The Foundation acquires land for conservation in and around the park, supports research in the region, and is a reserve partner in public service programs.