A memorial service will be held at 1 p.m. Saturday, February 24th at the Research Center for long-time ABDSP volunteer Clark Shimeall. Below is his obituary from The Courier newspaper of Findlay, Ohio. 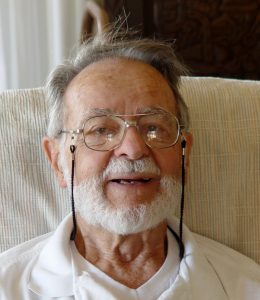 BORREGO SPRINGS, Calif. — Clark McMillan Shimeall, a resident of Borrego Springs, CA, and formerly of Findlay, was born March 21, 1922 in Kansas, and died at home on Jan. 22, 2018. He married Eleanor E. Euwer and they celebrated their 75th wedding anniversary on Dec. 27, 2017 with all 5 children, spouses, 6 grandchildren and 6 great-grandchildren.
He graduated from the University of Colorado, Boulder, with a degree in Geology, and was president of his fraternity, Sigma Nu.

In 1943 after training in meteorology and photo intelligence for the Army Air Corps, Clark was stationed on Guam.

After the war, Clark worked for Marathon Oil Co. for 20 years, with 5 years in Guatemala as Chief Geologist and later as Exploration Manager. The family returned to Findlay, Ohio in 1963. After receiving his M.S. in Geology from Bowling Green State University, Clark taught geology and natural science in Spanish at Elbert Covell College, part of the University of the Pacific, in Stockton, CA, from 1968 to 1986 and finished his career as its Director.
His life will be celebrated in a memorial service on February 24 in Borrego Springs.
Memorial donations in his honor may be given to the Anza Borrego Foundation, Solar Cookers International in Sacramento, CA, Survivors of Torture in San Diego, or your favorite charity.